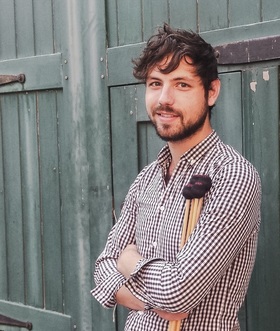 Andy Thierauf is a Philadelphia based percussionist who specializes in the creation and performance of contemporary music. He is particularly interested in combining percussion with theater, dance, and technology.  He performs with `Arcana New Music Ensemble, NakedEye Ensemble, Orchestra 2001, among other ensembles in the Philadelphia area. Andy teaches at Settlement Music School and is an adjunct professor of percussion at Kutztown University.

He has appeared in Philadelphia, New York, Boston, Argentina, and across the Midwest at music festivals, conferences, and symposiums. Andy has performed at SEAMUS and PASIC on several occasions and is a member of the PAS Music Technology Committee. His creative research centers on seamlessly integrating technology into performance to produce collaborative, multi-media presentations with writers, dancers, actors, choreographers, and composers. In 2016 he self-published a collection of works for solo percussion and live electronics titled The Post Modern Percussionist.

Andy is half of stb x at, a dance/percussion duo with dancer and choreographer Sean Thomas Boyt. The ensemble has performed and held residencies at various universities, art galleries, and non-traditional venues across the country. He often collaborates with dance companies including Vervet Dance, the Naked Stark, and Anne Marie Mulgrew and Dancers Company.

In 2012, Andy was featured as the dancing percussion soloist for a commemorative video recording of Paul Elwood’s Edgard Varése in the Gobi Desert. His collaborative work, Growing Fast in Sawdust, was featured at the 2013 PASIC Technology Day that featured his original composition and video by Sean Thomas Boyt. He continues to produce collaborative performances with various artists, and also organized and curated iHearIC, a concert series in Iowa City that features local performance artists. Andy has premiered many new works for percussion and has worked with composers such as Will Huff, Zach Zubow, David Gompper, and Paul Elwood.

A native of Cincinnati, OH, Andy received his B.M. from the University of Cincinnati College-Conservatory of Music and M.M. from The Ohio State University. He has studied percussion with Rusty Burge, Jim Culley, Allen Otte, Susan Powell and Joe Krygier, and composition with Tom Wells, Marc Ainger, Larry Fritts, and David Gompper.